On December 1st, Theodore, the alternative-electro artist and producer hailing from Athens, share his cinematic new single ‘Man and His Tools’. Released via United We Fly Records, ‘Man And His Tools’ is the first single to be released from Theodore’s fourth studio album, “The Voyage”, set for release in 2022.

‘Man and His Tools’ delivers an evocative cinematic soundscape of eerie electronics crashing against euphoric instrumentals and a processional drum beat. Theodore’s warm distinctive vocal drops in to encourage escape from the dystopic landscape.

Theodore said about the track:” ‘Man and His Tools’ is really a metaphor for evolution, originally inspired by the first chapter of the film ‘2001: A Space Odyssey, The Dawn of Man’.

The song became even more relevant living through the dystopic reality that is Covid19 and the ongoing climate change crisis. These are the tools that got us into space, but at the same time are contributing to the destruction of the earth. The music alongside the video is about escaping these dark realities. I wanted there to be an underlying message of optimism running through the narrative and perhaps, in a way, try to inspire people to use these tools for positive change.

Theodore’s releases to date have received critical acclaim from the likes of BBC Radio 6 and NPR Music and Gigwise. Collectively his songs have amassed over 328k streams on Spotify alone and accumulated 6.75k YouTube subscribers across his channel. The talented songwriter and performer has played and headlined a host of live shows across Europe since 2014. He’s supported the likes of Amber Run and Stereolab as well as played the Reeperbahn festival in Hamburg and performed at SXSW where he was picked as NPR Music’s ‘Favorite Discoveries And Memorable Moments’. Theodore has also played the stages of The New Colossus Festival in New York and Berlin and in 2019 performed more than 40 headline gigs across Europe and the US. The final show of the tour was an exclusive concert on Bob Boilen’s world-renowned Tiny Desk. 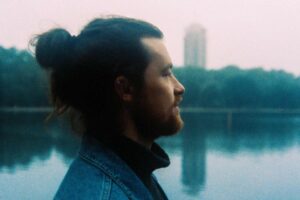