THE DEBUT ALBUM RELEASED MAY 27 VIA GOLDUN EGG RECORDS

Rising singer-songwriter FERGUS will release his debut album Love Upside Down on May 27 via Goldun Egg Records. Co-produced by Fergus and Goldun Egg Label boss/songwriter-producer Jake Gosling. Love Upside Down contains the lead single ‘Fight Forever’ released the same day, alongside the acclaimed singles ‘Flatline’, ‘More Than I Deserve’ (watch the stunning video here), ‘All I Dream’ and ‘Leave Me Light’.

‘Love Upside Down’ is an extraordinary, emotional, cliché-free cycle of shapeshifting songs, which capture the highs and lows of a new relationship. This album is the result of a near five-year partnership with Gosling (Ed Sheeran, Lady Gaga, KSI) the mentor FERGUS first met just for a few hours of advice. Everything from his high, heart-melting vocals, unusual phrasing and fiendishly clever lyrics, to his intuitive guitar playing and adventurous spirit had Jake hooked. By the end of that first fortuitous day, the pair had agreed to release one song. That led to a trio of annual EPs before the pandemic-delayed ‘Love Upside Down’ got underway.

All initial album plans were put on hold in 2020 when the pandemic struck, FERGUS exchanged the soon to be locked down London, for the wide-open spaces of Cambridgeshire and fell in love. The batch of bitter break-up tracks he’d recently written were binned and a new set of songs were soon underway. Fate had intervened again. The result is a warts’n’all look at love. From heady early days in a sun-drenched lockdown haze, to the difficulties of returning to work and the sudden separation it involved, to arguments, compromise and accepting the blame for finding fault, Fergus’s poetic lyrics depict real life rather than fantasy.

FERGUS, writes all of his songs solo and plays most of the instruments on the album, ably assisted by guitarist Jacob Nation and drummer Mike Cosburn and the complex nature of real relationships is mirrored in the music’s shifting structures and a wide range of styles. Skipping seamlessly from acoustic folk, indie and psychedelic rock to swathes of synths, a dip into jazz and even the spectre of samba. Striking instrumental interludes abound. Songs flit from light to dark or burst unexpectedly into sunshine. Some are intimate, others expansive.

FERGUS, writes all of his songs solo and plays most of the instruments on the album, ably assisted by guitarist Jacob Nation and drummer Mike Cosburn.

FERGUS spoke candidly about the album “Thanks to all pre-covid plans being put on hold, I have a much more mature body of work. My sound evolved a lot. Maybe love songs might be an easier sell than my previous angry rants! That said, I’m not naturally an upbeat person and I hadn’t written a happy song in five years. Even now, hearing myself sing about being in love is out of my comfort zone. I feel I’ve covered all bases in ‘Love Upside Down’, I definitely couldn’t write a whole happy album.”.

He continued to talk about the lead single “Fight Forever started as a fun song I made when a brief came through to soundtrack an “ironic fight scene”. I wrote a song about two people falling in love whilst having a physical fight. Although I didn’t get the job, I really loved the chorus of the song! So, I rewrote the verses to be less comedic and more dramatic, then added some context in the middle to keep it personal.”

FERGUS has been writing and performing gigs since moving to Bristol to study aged 18, prior to that, he toured with the famous Kings College Choir, FERGUS was just 10 years old when he performed at the Sydney Opera House during a tour of Australia. It’s taken the intervening years for FERGUS to truly believe in his undeniable abilities as a truly original singer-songwriter and performer. His releases to date have received critical acclaim from the likes of BBC Radio 1, 6 Music, Radio X, Clash, HUNGER, Wonderland, Songwriting Magazine and Atwood to name but a few. Collectively his songs have amassed over one million streams on Spotify alone.

In September 2021 FERGUS headlined a packed-out show at The Troubadour and continues to entertain on the live circuit into 2022, for venues across London such as The Lexington and The Bedford.

‘Love Upside Down’ delivering a cohesive body of work that captivates from the outset, twisting and turning from one spellbinding story to another showcasing FERGUS as a rising star in the making.

“Fergus is growing and evolving his artistry in real-time” – ATWOOD

“The first thing you notice about Fergus is the voice. High, keening, mellifluous, his virtuoso performances can distract from the depths of his songwriting, until you begin to tune in to the finer details.” CLASH

Providing us with the perfect new tune to soundtrack our entrance into autumn, is London-hailed singer-songwriter FERGUS with “Enough for You” Wonderland

“A mesmerising look at a rising star” HUNGER Magazine

“Young Tonight” is a near perfect nostalgic track. The sway and vocals soothe us more than we can articulate.” –Ear to the Ground

“Fergus’ delivery here is reminiscent of classic Crowded House, with a touch of Jose Gonzalez. While the warmth of the instrumentals succeeds in conjuring the sense of euphoria and positivity that Fergus is seeking to harness.”

Record of the day 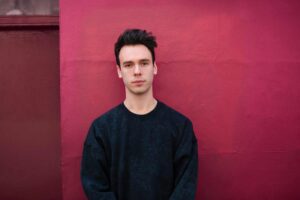