‘Dear Heart’ opens with the rumble of an organ’s almost funereal tone. FERGUS’ pitch perfect haunting vocal captivates, as he lays bare his soul through a series of painfully heartbreaking declarations to a mother that he thought he was going to lose.

FERGUS said about the track “I started writing Dear Heart a long time ago now, when I was facing the prospect of losing someone dear to me. I wrote that seasons change and time marches on, but I’ll always have you here, in my heart. The second half came along, years later, at the end of the decade when I was thinking about what I would have wanted to say, had things not worked out so fortunately.”

FERGUS’ releases to date have received critical acclaim from the likes of BBC Radio 1, 6 Music, Radio X, Clash, HUNGER, Wonderland, Songwriting Magazine, Atwood, WTHB, TMR and Hidden Herd. Collectively his songs have amassed over one million streams on Spotify alone. FERGUS has released three EP’s: ‘Purple Road’ ‘18, ‘Three of Swords’ summer of ‘19 and ‘Close Quarters’ Dec ‘19. 2020 saw the release of 4 singles. At the beginning of 2021 he released Live EP ‘Live from Rivoli Ballroom’ followed by 3 singles.

The talented songwriter and performer completed a series of live shows across London at the start of 2020 and has been keeping fans entertained through live streaming shows for the likes of When The Horn Blows, The Sunflower Lounge and Instagram live. In September 2021 FERGUS headlined a packed-out show at The Troubadour and continues to entertain on the live circuit into 2022, see below.

The first thing you notice about FERGUS is the voice. High, keening, mellifluous, his virtuoso performances can distract from the depths of his songwriting, until you begin to tune in to the finer details. New single ‘All I Dream’ is out tomorrow – CLASH

“Young Tonight” is a near perfect nostalgic track. The sway and vocals soothe us more than we can articulate.” –Ear to the Ground 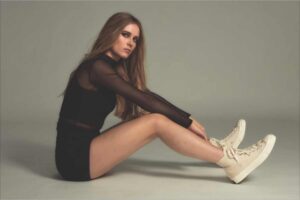