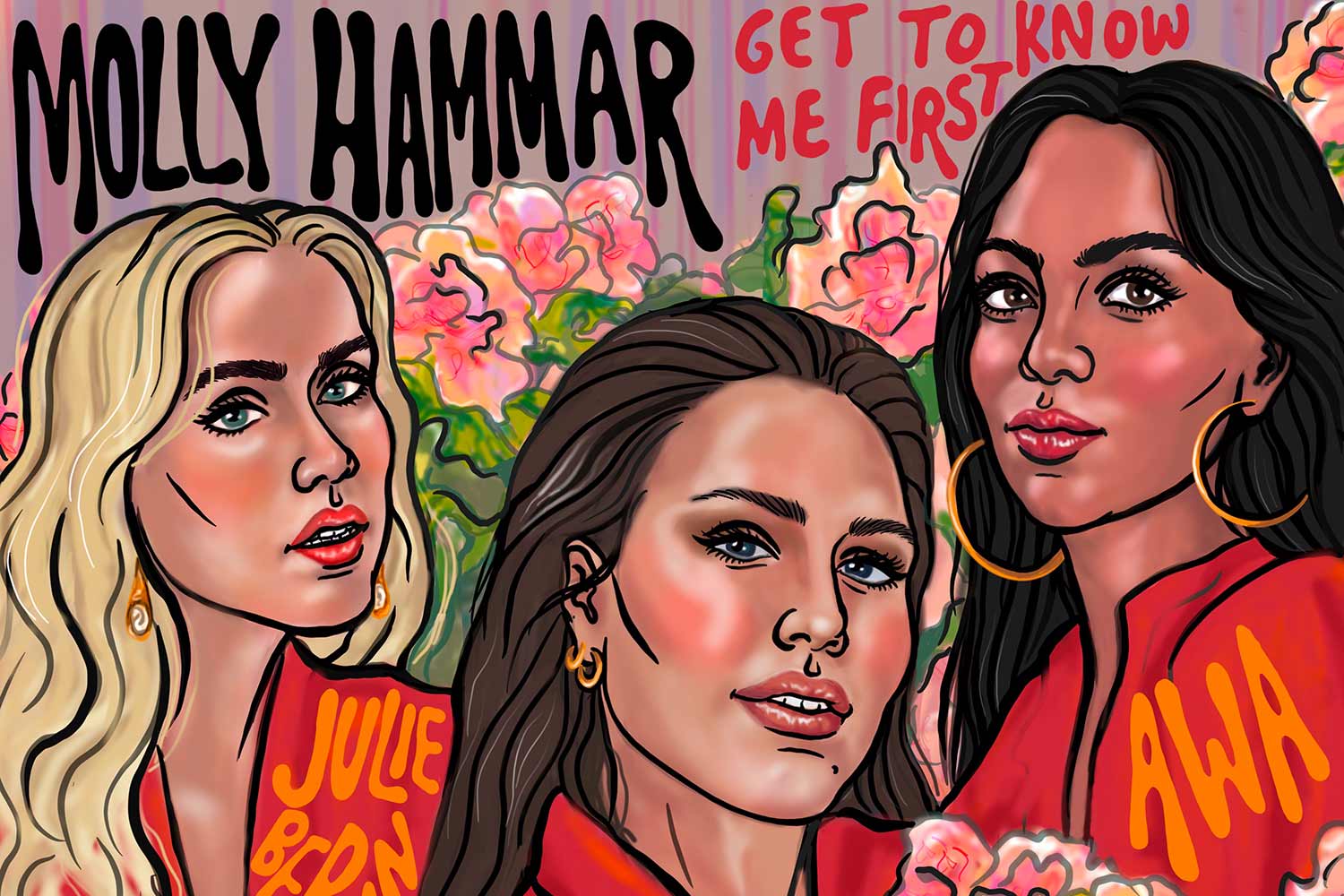 Molly Hammar releases ‘Get To Know Me First’

The collaboration champions sisterhood and encourages ladies across the globe to embrace themselves and empower each other by having one another’s back.  A deep baseline and honeyed melodies provide an infectious backdrop to Molly’s effortless smoky vocal. As the sun-drenched steady groove bounces forward the comradery of this female trio captivates to support a strong message of solidarity.

Molly said about the single “When I wrote the lyrics for “Get To Know Me First”, it started as a celebration of single life, but then evolved as a call for all women to dare to set boundaries and not “settle for less”. I was so happy when Awa and Julie jumped on the song as I think they are awesome and want us women to continue to support each other more than ever. This song is a tribute to all women”

AWA continued ‘Get To Know Me First’ makes me happy. It makes me feel sexy, free and powerful. Even more so since I’m releasing this with my female friends. And yes, I have to point out that we are women because we always get compared to each other and especially in the industry we are in! It’s like a slap in the face to that, we are here to celebrate one another. I’m a huge advocate that self-love is the most important love. After being in a rut not knowing who I was, putting myself first helped me step into my power again. Setting boundaries and knowing what you want and demanding it, which is what this song is about is a crucial part in yourself love practice! I hope we can inspire you to love every part of yourself and not allow people to minimise you. Get to know and love you first, and the rest will follow 😉

Julie also said about the collaboration ‘Get To Know Me First’ is such a feel good tune and I’m thrilled to be singing with such talents and a my girls Molly and Awa.  I love collaborating with other artists, but all female collabs feel extra special to me. People are always trying to pitch girls against each other, when we actually feel the opposite way! We support each other and have each other’s back. I hope this song can inspire other women to not be afraid to set their own boundaries, to know their worth and also inspire other women to applaud one another.

Norwegian artist Julie Bergan has amassed over 450 million streams and received multiple Norwegian Grammy nominations, and Swedish Awa is signed to the UK based label Columbia Records and was named ‘Artist to Watch 2020’ by VEVO.

Molly was signed to a major record label in her native Sweden during her teens and was propelled into the limelight, but the commercial pop she was making did not fit with her artistic vision. Obsessed with R&B and keen to make more of her versatile voice and background in jazz and soul she split from her record label and flourished under her newfound creative control.  In 2018 Molly Hammar truly found her own sound with the release of her critically acclaimed EP ‘Sex’. Singing about female sexuality from a very personal perspective sparked Molly’s inspiration and helped her grow a fanbase of young girls who could relate to her message.

Follow-up singles such as the Big Narstie collaboration ‘No Place Like Me’, pop banger ‘Words’, her soulful Kim Cesarion duet ‘Show Me’, radio ready hit ballad ‘Shortcuts’ and recent hit single ‘Alone’ have enabled Molly to balance the perfect combination of kick ass R&B vocals and soulful beats, with a truly contemporary pop sound. Recent releases have garnered widespread media support across the UK and globally from the likes of BBC Radio 2, BBC 1Xtra, Channel 4, Billboard, The Line of Best Fit, Complex, NYLON and Idolator to name but a few. Molly has been captivating audiences across Europe with her live shows, her first packed out performance at Colours Hoxton was reviewed by UK tastemaker Alfitude as “one of the best showcases I’ve caught this year”. Molly also played the Swedish equivalent of Beyonce’s character Nala in the live-action adaption of ‘The Lion King’ at the end of 2019 and in February she sold out her first two headline gigs. Molly’s live show at definitive London based Nordic club night Ja Ja Ja at The Lexington, which was scheduled for April, has been postponed until UK venue’s can safely open again. Molly releases ‘Get To Know Me First’ on August 14th via Cosmos Music ahead of her hotly anticipated second EP due for release early 2020.