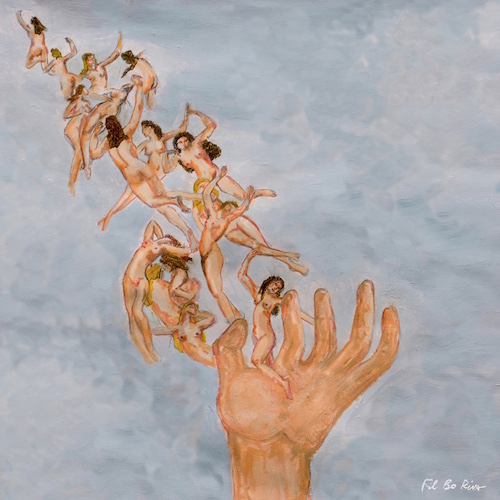 Written over the last two years, the collection of indie-pop gems possess a breezy confidence and assurance, scanning like the work of a canny veteran. This is no surprise; after countless hours in the studio honing and re-recording ideas alongside guitarist Felix A Remm and producer Robert Stephenson, they have a worn in feeling, like a pair of favourite slippers.

Filippo Bonamici vision was simple – craft songs that would sound fresh and relevant for more than just a few years. “Not too modern, and not too old,” Bonamici says. “Songs that can stand the test of time, in the same way that Coldplay’s Parachutes has.” He’s keen to stress the importance that both Remm and Stephenson had in this regards, helping to shape his music and develop ideas, coaxing out the soul of each track. “I see it almost as a mix between a solo project and a band. Without them, the music would have sounded very different indeed.”

The tone is set early with euphoric opening track ‘Time Is Your Gun’, full of soaring vocals and dreamy, sky-high guitar lines. It recalls the heyday of joyous, hands-in-the-air indie sing-alongs, and is a summer festival anthem in waiting. ‘Blindmaker’ is similarly uplifting, walking a line between neat guitar grooves and widescreen crescendos. “It feels so right I could die / Loving you” he croons, revealing his inner hopeless romantic.

Elsewhere, the straight up indie stomp of ‘Go Rilla’ has radio hit written all over it, while ‘Radio Fire’ – a dialogue between regretful lovers – has a dark swagger and lusty undertones, a torch song for modern times that’s ignited by an incendiary, fuzzed out guitar line. Love is a common theme on Beautiful Sadness – “I wrote about things I was going through; issues, problems, and beautiful things with my girlfriend,” he explains – and Bonamici doesn’t shy away from direct declarations. “You mean too much to me”, he sings on ‘Radio Fire’, a sentiment that morph’s into “I’m tryna get control of this love”, on ‘Head Sonata (Love Control)’.

Yet he’s equally adept at the plaintive and poetic. “Inside your wondering eyes I see the stars”, he sings on ‘Wondering Eyes’ with the same sweetness that’s baked into ‘L’over’, a wonderfully tender paean to loneliness and broken hearts. Such sentiments reach a peak on ‘L’Impossibile’, a beautifully sensuous slow jam that highlights his production skills as much as his songwriting ability. Slipping into his native Italian for the widescreen chorus, sung over trilling mandolins and sweeping pianos, it’s epically lush in the way that classic love songs always are – a key change towards the end pushing it even further towards the heavens.
In many ways, it defines Beautiful Sadness and everything Bonamici set out to achieve. Immensely proud of his heritage, one of his dreams is to prove that artists from Italy – or from anywhere – can succeed on their own terms in international markets without downplaying their roots. It’s something he’s thought about since he was a kid, messing around in the garden with those cutout guitars. Now, aged 26, and the author of such an assured collection of songs, it’s a dream he’s surely about to realize.

“Italian songwriter Fil Bo Riva has something special. There’s a deftness of touch in his work, an ability to truly engross that makes him stand out.” – Clash Magazine

“…dulcet indie vocals reminiscent of Johnny Borrell (plus a heap of alto thrown in for good measure) with the vibrant twang of tingling guitar layers.” – One Stop Record Shop
“Berlin-based, Italian-born musician Fil Bo Riva is a smorgasbord of European influences, all of which are melted together in a crockpot of infectious indie pop. The new single ‘Go Rilla’ is compelling, full of flavour and contemporary rhythms.” – The National Student